Imagine a world in which doctors will be able to predict illness, and really offer healthcare, as opposed to the “sick care” that they provide today; or a future in which your self-driving car could be despatched to collect groceries or pick up children from school while you continue with an uninterrupted work day. 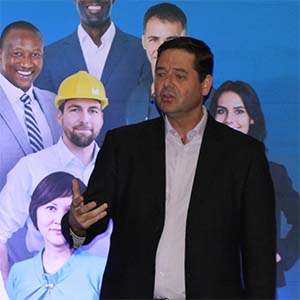 These were the scenarios presented by author, futurist and founding director of TomorrowToday South Africa, Graeme Codrington, in a thought-provoking presentation at the inaugural SAPICS Spring Conference.

Codrington shared examples of the fourth industrial revolution’s (4IR’s) possible impact on healthcare and transportation and outlined the 4IR principles and “new rules for success” that supply chain professionals should be considering in order to future proof their businesses.

“The fourth industrial revolution is not about new technology, but rather about reimagining how we use existing technology,” he told SAPICS Spring Conference delegates. “Having data is not 4IR, but what is, is considering what we can do with that data to reinvent sectors like healthcare. We currently have a ‘sick care system’, not a healthcare system; but this could change if doctors were able to predict illness based on data from their patients’ smart watches, for example, and other sources.”

Google can already predict flu outbreaks based on the number of people in a particular location searching flu symptoms, he said. “If doctors had access to information like this, and to patients’ smart watch data and local school absentee records, and they used AI and analytics to connect it all and extract information, they may actually be able to predict illness in the communities they serve. They could be paid to keep people well, rather than just treating them when they are sick.”

In another scenario presented to SAPICS delegates, Codrington shared his predictions for autonomous vehicles. He believes that when they do become mainstream, self-driving cars will become compulsory. “The real value of driverless cars is realised when autonomous cars can speak to each other and to the road traffic systems, so that every vehicle on the road is following the same rules. This enables efficiencies like lane swapping to address peak traffic requirements.”

While the future could see self-driving cars doing the shopping or school run rather than sitting idle in an office carpark, Codrington said that it was most likely that cars would not be owned assets in the future. “Car sharing makes more sense. Why own a car that spends most of its time doing nothing? Those who really love their cars and want to own and drive them for pleasure will most likely be like horse owners today,” he told the audience.

“Horses – once our main means of transport – are now enjoyed by weekend riders and enthusiasts. Car lovers in the future will most likely pay someone to look after their car and go and visit it at weekends, while using a network of compulsory, shared, autonomous cars for their day-to-day transportation needs.”

In the 4IR principles for success that he shared, Codrington stressed that data is our most important and valuable asset today. He asked SAPICS Spring Conference delegates to consider what data they are collecting; what they are doing with it; how useful it is; and how many data scientists are employed by their business. “Data analytics and the personalisation of data are vital,” he stated.

Gamification and experimentation were other 4IR principles that Codrington urged attendees to embrace. “Promotions can be ‘gamified’. Choose your experiments wisely, but it is necessary to experiment into the 4IR,” he said.

While there is a common misconception that the 4IR will see humans replaced with AI and technology, Codrington contends that it is not about making business so digital that we don’t need people. “Machines can’t do everything. They don’t have creativity, morals, ethics or empathy. Doctors, for example, will not disappear, but their role may be reimagined; and we must reimagine ourselves in the 4IR, not out,” he concluded.